What is Hydraulic breaker and how does it work?

The Hydraulic breaker is also called a hydraulic hammer or rock hammer. It is a construction equipment that is used for the demolition of a building and breaking rocks or concrete into smaller sizes. The hydraulic breaker is one of the most popular excavator attachments and works on the principle of hydraulics. It applies high pressure from its small canister which has pressurized hydraulic oil stored in it. They are much more powerful than other hand-held hammers and their force is varied based on the force of piston strokes and their size.

What's the type of inner valve and outer valve? 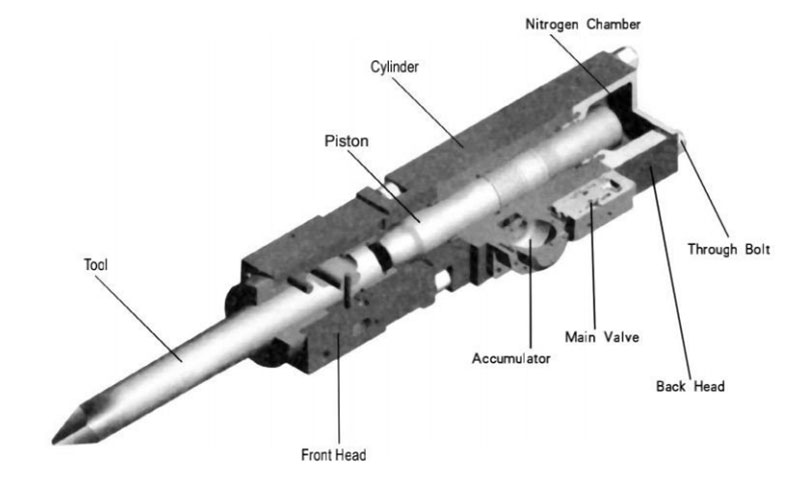 Piston: A piston transfers impact power to the tool, generated by hydraulic power. It is also present in both types of hydraulic breakers which convert kinetic energy into hammering energy a front head is featured to support the machine and one back head which contains nitrogen gas.

Seal retainer: the seal retainer has oil seals to seal Nitrogen(Nz) gas in the back head, and to prevent hydraulic o leakage.

Front head assembly: this retains the tool, using the tool pins. By removing these pins, the tool can be changed.

Ring bush: This guides the tool, Ring Bush limits the uppermost position of the tool. It is consumable parts, which should be checked for wear limits. If needed, they should be replaced.

Chisel: this transfers piston impact power to the objects. We recommend various tool shapes according to working circumstances.

Rod Pin: this is installed on the front head, and prevents the tool from coming off.

Back head assembly: this contains the cushion chamber charged with nitrogen(N2) gas that is compressed during upward strokes of the pistoning and serves to provide maximum absorption of the piston recoil, efficiently storing this energy for the next blow.

Through bolts: these are used to assemble the front head, the cylinder, and the back head. They have to be constantly tightened to the specified torque. Inspect the bolts for loosening, and re-tighten them weekly. 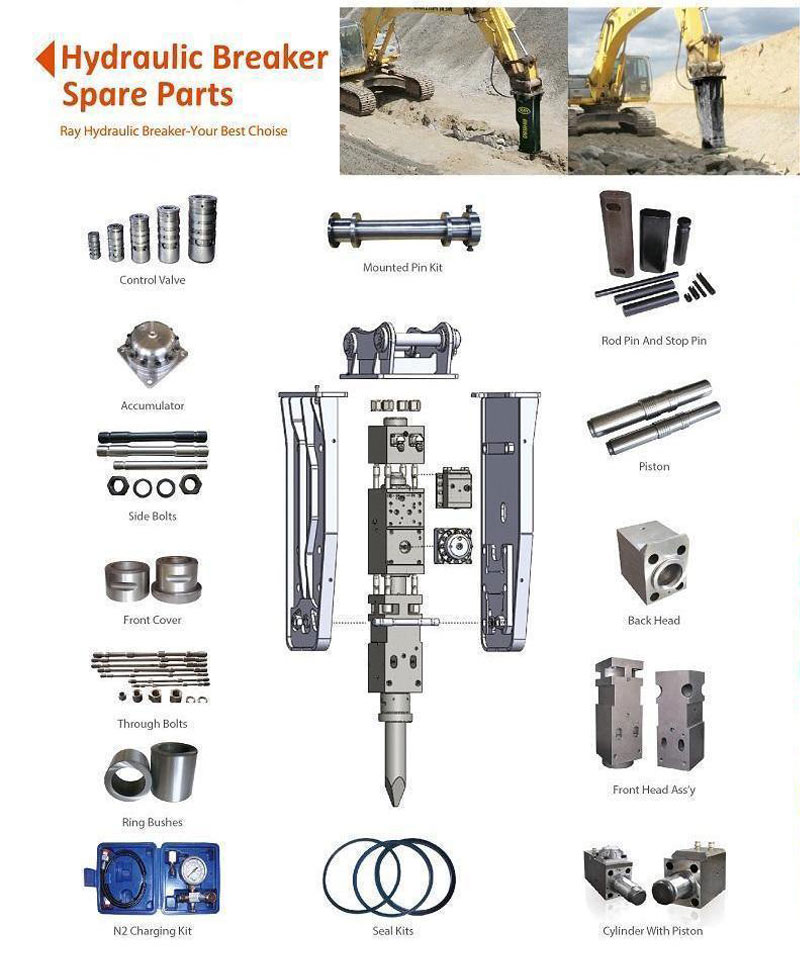 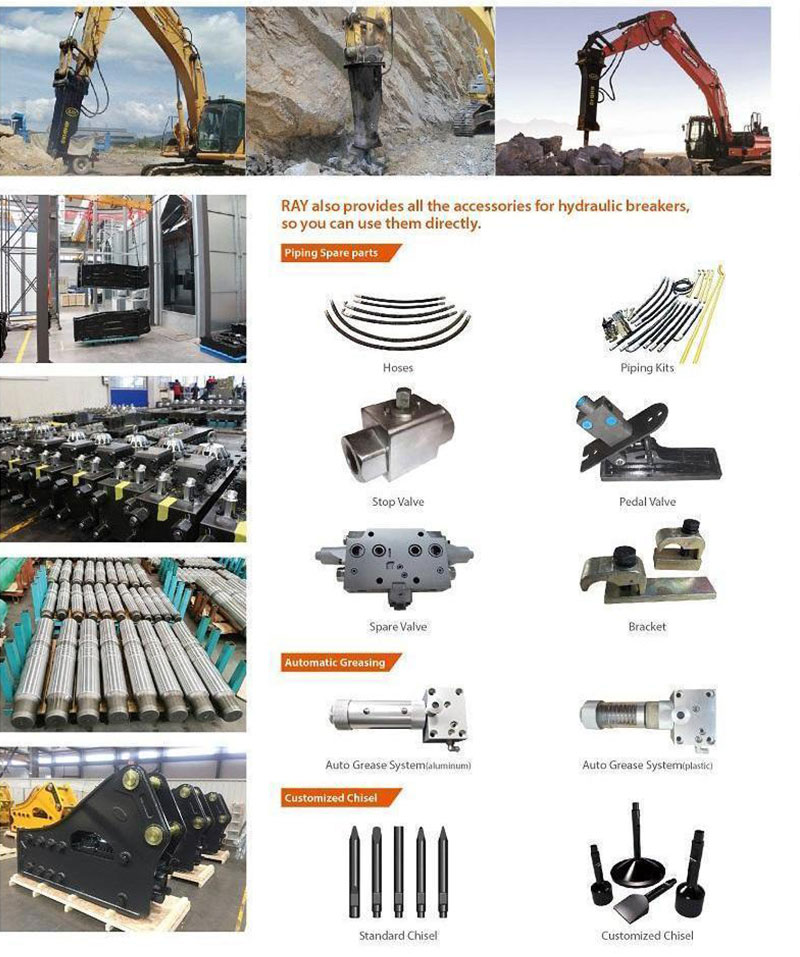 What's the prinple of hydraulic breaker?

Hydraulic breaker works on the principle of hydraulics by Blaise Pascal which states that “applying pressure on one part of a fluid transfers that pressure to all areas of the fluid, allowing for a multiplication of force”. Since the oil used is incompressible, it allows the transfer of power instantly with negligible loss. 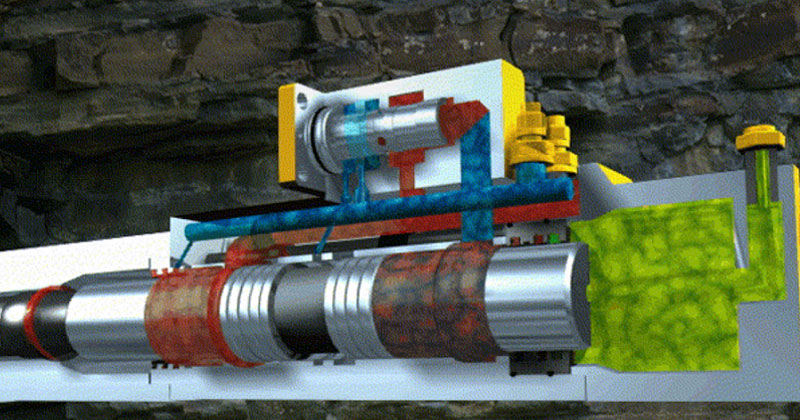 As the piston reaches the upper end of the stroke, the main valve directs the flow to the upper chambers which makes it a high-pressure chamber. This causes the piston to move downward because of accumulated energy from the gas chamber, hence creating the impact stroke cycle. The energy is transferred to the tool that uses it to do various tasks.

At the point of impact, the main valve shifts, and the pressure from the upper chamber is released, enabling the upper stroke to take place.

Hydraulic hammers are environment-friendly because they produce less noise and pollutants. They are preferred in places that are sensitive to vibration and noise, as a vibratory hammer may damage the existing structures.

What's the safety operation for the hydraulic breaker?

For the safety operation, there are some suggestions to recommend.

2. Stop the hydraulic breaker operation as soon as the object is broken. If operation continued, idle blows, could result in excessive wear of major components, or parts damage such as inner bush or piston.

4. Do not use tool as a lever. Hydraulic breaker could be damaged at through bolt,tool, front head inner bush and front cover.

5. Move impact point of object, if the object does not break with in 30 seconds.

7. Under water kit must be installed when hydraulic breaker for working in water. Please contact to our dealer, if you need.

10. Do not curl the tool tip into arm or boom of base machine when travelling or parking carrier.

11. Do not strike in one spot for more than 30 seconds. If object dose not break, stop breaking after than change the spot of object. Working too long in one spot will create excessive stone dust under tool. Dust dampens impact effect, and can be damage piston seal.

12. Never use hydraulic breaker as a transporter. This could result in tipping carrier, or damaging on base machine.

Get Skid Steer Attachments Factory Price Now
If you have any questions and needs, please fill out the form below and contact us! We will reply to you within 24 hours!

Get the Latest News Delivered Daily !You may unsubscribe at any moment.
Copyright © Changzhou Raymond International Trading Co., Ltd. All Rights Reserved. Support By MMYTECH. Sitemap